From CECEpedia
Jump to navigationJump to search

The Doctor is a Champion from Airlocked! season 2.

The Doctor is a traveler who, if believed, has been all over time and a great deal of space in his home universe. Traveling in a ship known as the TARDIS, he frequently ends up at the center of volatile events either by accident or design. Despite any claims he makes to the contrary, his inability to let danger or injustice pass unnoticed is apparently what earned him the title of Champion of Earth. Over the course of Season 2 he offered several other Champions the opportunity of traveling with him, eventually extending the offer to all those who survived the final trial. 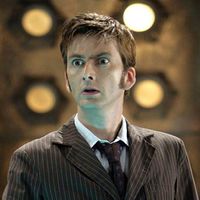 The Doctor as seen in season 5

At the beginning of the revived Champion Excellence Program, the Doctor appeared to have regenerated.

The Doctor appeared in the unaired pilot, attempting to threaten the Overseers via messages sent through C.E.C.E after the delivery of the motive. His efforts to find an escape route throughout the week were futile, and he helped investigate the crime scene directly after McCree was killed.