From CECEpedia
Jump to navigationJump to search

Touko Fukawa is a Champion from Airlocked! season 4.

Touko Fukawa is the Super High School Level (SHSL) Writer of Hope's Peak; although that talent has ceased to be much use to her since the conclusion of her School Life of Mutual Killing, perpetrated by Junko Enoshima and her followers. With her world in decline, she has dedicated herself instead to the revival effort of Towa City and Hope's Peak alongside her fellow survivors and best friend Komaru Naegi.

She is currently serving as an intern for the Future Foundation, an organization responsible for quelling the social uprisings and destruction that continue to be caused by the Remnants of Despair. Under the supervision of her fellow members she strongly intends to make herself useful to those around her. Particularly, Byakuya Togami-- the focus of her unrelenting devotion and admiration.

Not much is known about Fukawa's early history. Even as she slowly warmed up to others, she was not very open about herself. She mentioned once to Shirou Emiya that she had a father and two mothers, but never explained those unique circumstances.

Early on Touko Fukawa made it clear that this was not the first time she was subjected to such a game-- claiming that Hope's Peak was the setting for a previous killing game. Described as a school for exceptionally talented individuals, she explained to anyone who would listen to her that a girl named Junko Enoshima prepared this game to promote despair.

The talent that brought her to the school was her writing. Calling herself the "Super High School Level Writer" or "Ultimate Writer", her books appear to have had some following. In fact, one of them: So Lingers the Ocean appeared in Airlocked! in the possession of Sakunosuke Oda; who appeared to have enjoyed it very much.

Having survived the School Life of Killing back home, she explained that thanks to Junko, her world was currently in great disarray and that the organization she worked for was doing it's best to pick up the pieces. As an intern of the Future Foundation she was doing her part to rebuild Towa City along with her friend Komaru Naegi.

Touko Fukawa was one of three girls assigned to Cell 1, alongside Max Caulfield and Pyrrha Nikos.

Genocider Sho/Syo is Touko Fukawa's alternate personality. The two do not share the same memories. Touko appears to have learned how to control the other somewhat, however it seems that certain shocks to her system including gratuitous blood, sneezing or electric shocks are capable of forcing her to switch.

Aside from her personality, there are a few other key differences between the two. When Sho/Syo is in control, her eyes become red. Her tongue also changes, becoming pointed and extending from her mouth. Her speed and strength also appear to double, although it is unclear whether or not we have seen her full strength. Her weapons of choice are scissors.

The mascot character of the Hope's Peak killing game. It appeared in Airlocked! in small, plush form. She describes it as a robotic entity the Mastermind used to control the game from the shadows. It seems there is not one, but many of them that were produced, so that should one be destroyed, there was always a backup. It's design is split down the center-- one side white and cute and the other black and menacing. While one eye is normal, the one on it's black side is red and jagged. Likewise, it's mouth is split in the same fashion; the white side cute and the black side with a menacing, toothy grin. 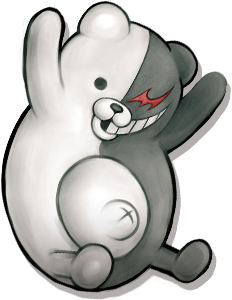